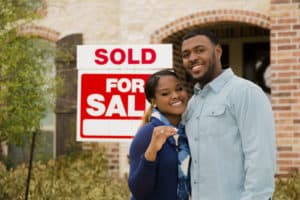 Industry players have reported a surprise uptick in housing activity in recent weeks, suggesting the market has finally bottomed out

An improvement in property market conditions may sound counter intuitive, given the depressed state of the economy, rising unemployment and weak household balance sheets. But it seems home buying sentiment has in recent months been buoyed by banks adopting more lenient lending criteria. This has supported the entry of first-time home buyers, in particular, to the market.

Rudi Botha, CEO of mortgage originator BetterBond, says there is no doubt that banks are vying more aggressively for a slice of SA’s R980bn mortgage lending market. He says competition among lenders has increased markedly since ABSA announced its intention earlier this year to claw back the market share it lost while under the control of London-based Barclays.

The bank, which used to be SA’s largest home loan player, reduced its exposure to the market after its earnings were hit between 2009 and 2012 on the back of the financial crisis-induced housing crash.

Botha says banks are not only more inclined to grant 100% loans these days, but conversion and approval rates have also increased. 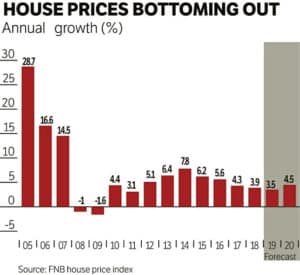 BetterBond’s approval rate on home loan applications submitted to the banks rose to 76% in July. That’s up from about 68%-70% a year ago, says Botha, and substantially ahead of the record low of 26% recorded by BetterBond in February 2010, when the SA housing market hit rock bottom.

Most of the activity is happening in the market priced below R2.5m.

“Current approval rates are not much lower than the 79% peaks we saw during 2007, at the height of the previous housing boom,” says Botha.

It seems that banks are also requiring smaller deposits from buyers. Again, first-time home buyers are the biggest beneficiaries of this trend.

According to mortgage originator Ooba, the average deposit paid by first-time home buyers was 25% lower in the second quarter than the same time last year: R86,650 against R115,378. That equated to 9.2% of Ooba’s average second-quarter purchase price of R942,873, down from 12.3% a year earlier.

For repeat buyers there was also a drop in the deposit as a percentage of the purchase price, albeit only from an average 14% to 13.3% in the same 12-month period.

Says Ooba CEO Rhys Dyer: “Banks are making it easier for first-time home buyers to enter the market. Some are even prepared to offer home loans exceeding 100% of the purchase price to help cover transfer and bond registration costs.”

Their stats paints an equally rosy picture of mortgage lending activity. Re/Max CEO Adrian Goslett says the number of mortgages registered in the deeds office jumped 18.5% year on year in the second quarter, from 38,055 to 45,109. The quarterly increase came to 13.2%, up from 39,836 in the first quarter.

ranted, current home loan volumes are still way below the 60,000-80,000 quarterly registrations typically recorded in the deeds office during the 2005-2008 housing heyday.

But Goslett says the latest bond registration numbers are nevertheless encouraging, as they suggest the market is becoming more active.

Other industry players say it seems many would-be buyers who were sitting on the fence, waiting for the outcome of the general election, have in recent weeks pushed ahead with purchasing decisions. 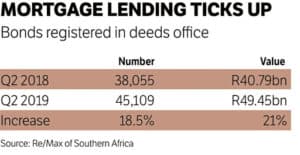 There is also a view that more value chasers are entering the market, hoping to cash in on bargains before prices rise again.

Property economists have already adjusted their house price forecasts upwards in light of improved trading conditions. FNB property economist Siphamandla Mkhwanazi, for example, says house price growth could accelerate to between 4.5% and 5% next year, up from the 3.5% forecast for 2019 as a whole, “provided there is another interest rate cut towards the end of the year”.

Mkhwanazi says there has definitely been a post-election pick-up in housing activity. But improved sentiment will take time to filter through to house prices, particularly given that supply still outstrips demand. He is confident, however, that another rate cut could translate into real growth in sales volumes and prices next year.

But the housing market isn’t out of the woods just yet. Du Toit cautions that if the economy doesn’t pick up momentum, and pressure on household finances persists, consumer credit records and confidence could take a knock. “That will reflect in banks’ mortgage risk appetite and lending criteria,” he says. 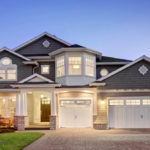